If you are looking for Artisan spirits, then there is a luxury gin or vodka in our range of
award-winning, small batch gins and spirits for you. 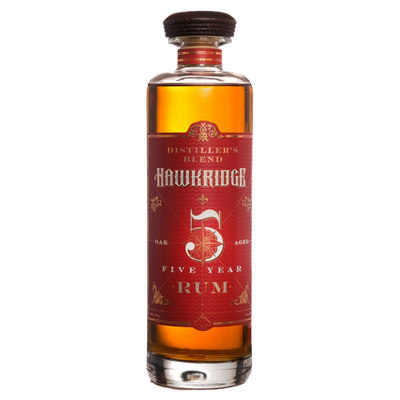 The rich flavour comes from the finest molasses that the Caribbean has to offer, matured for five years and finished in bourbon oak casks, then blended to create this warming masterpiece.

Our Hawkridge London Dry Victorian Aphrodisiac Blend is a beautiful Victorian-era-inspired gin like no other. 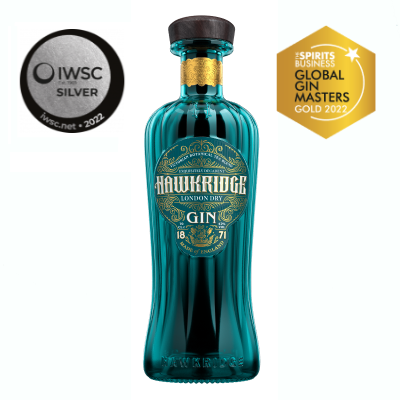 Our sensational Hawkridge London Dry “Victorian Botanical Blend” gin is a work of art in both design, mouthfeel and flavour profile. 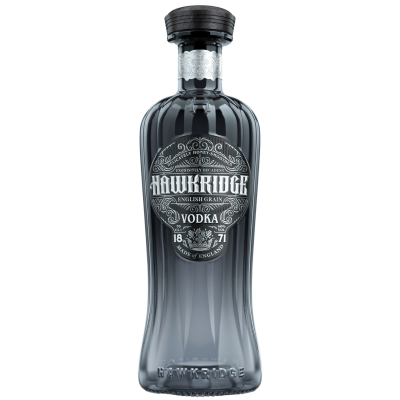 Our new Hawkridge English Grain Vodka is double distilled and triple filtered, to create its deliciously complex, yet smooth character. 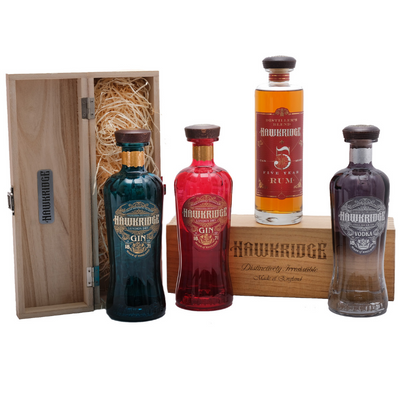 We know that our Hawkridge spirits are a popular choice for gifts, so we have created a stunning artisan gift box to make a special gift, that little bit more special. 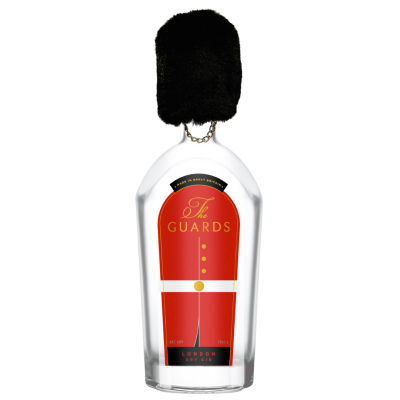 The Guards Gin is exceptionally smooth with a fresh citrus forward, subtle floral notes, a juniper burst and a dash of English honey. 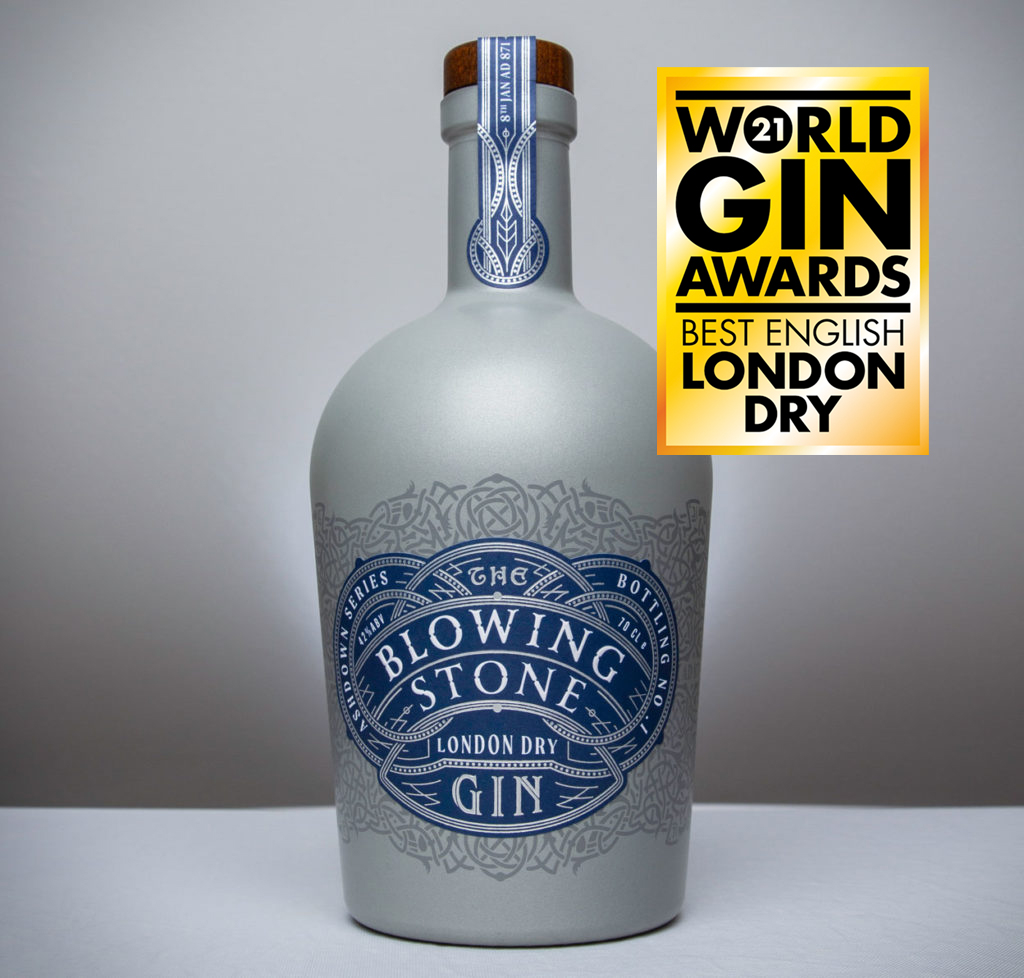 Awarded ‘Best English London Dry Gin 2021’ at the World Gin Awards, ‘The Blowing Stone’ London Dry Gin is the first in our Ashdown Series and is a tribute to Alfred’s first victory over the Danish Vikings. Batch-distilled using our three-part process, we use a blend of beautifully balanced botanicals which could be found locally during the middle ages.

Its delicate and distinctive flavour comes from a blend of meadowsweet, elderflower and hand-picked wild gorse from the North Wessex Downs. In the 9th Century honey was a delicacy and as we are also beekeepers, we add a dash of our home-made local honey to help smooth the flavour and provide the sumptuous mouthfeel of our gin. 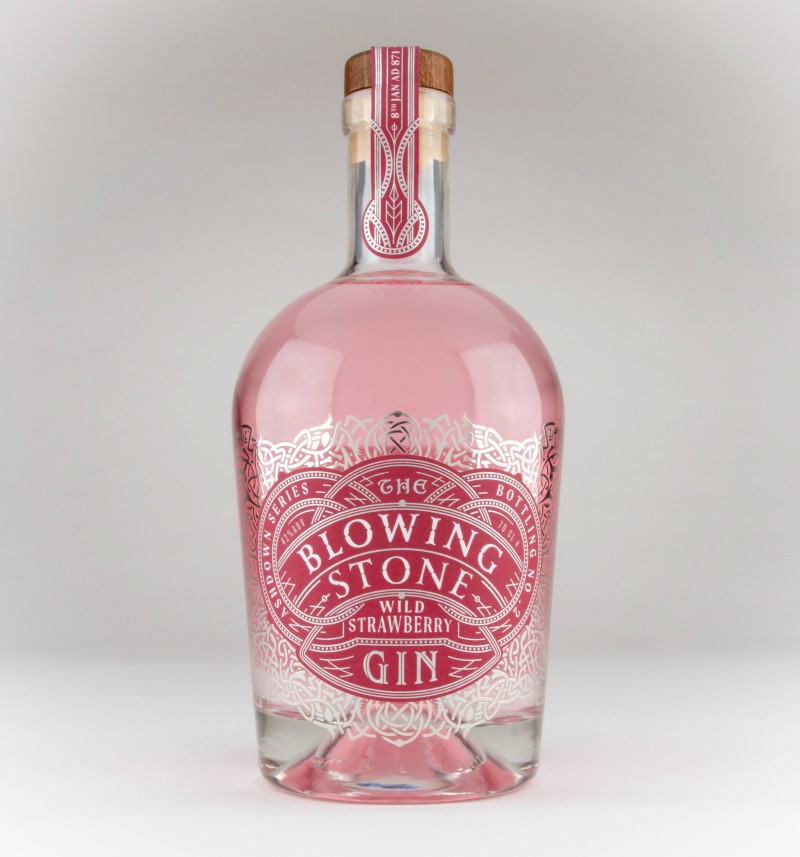 The second release in the Ashdown Series is our Wild Strawberry gin. Using our delicious London Dry recipe as a base, we have added wild strawberries to create a sweet and aromatic blush pink beauty.

Wild strawberries, known to the Anglo-Saxons as ‘streowberigan’ grew wild on grasslands and open woodland. Smaller and sweeter than today’s cultivated strawberries, they were a rare delicacy, providing a subtle burst of sweet berry flavour – very much like our gin. 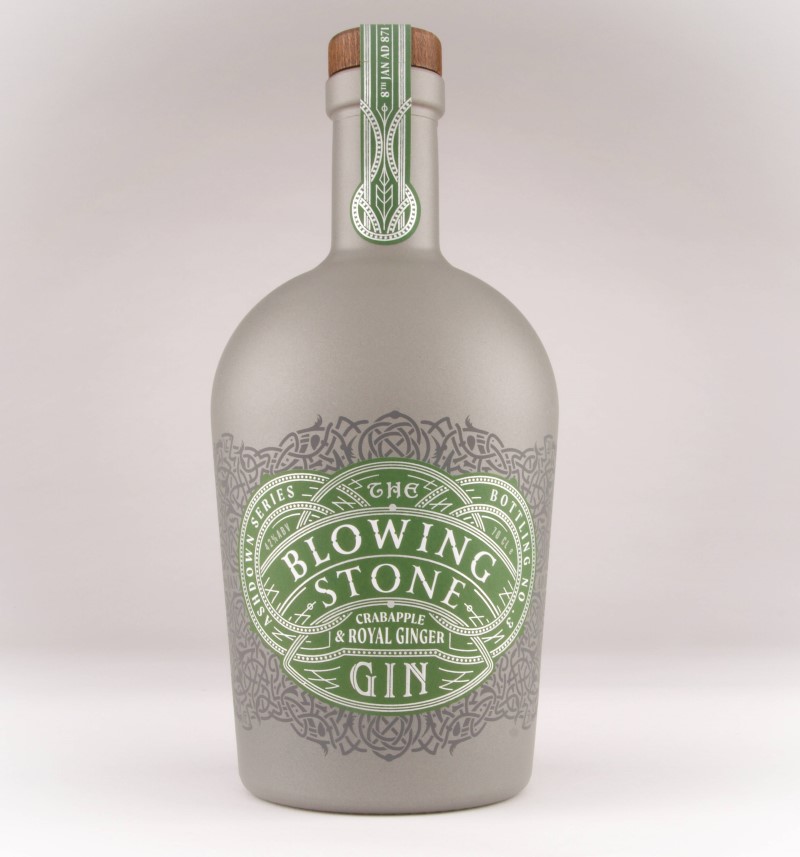 The third release in the Ashdown Series is our Crabapple & Royal Ginger gin. Using our delicious London Dry recipe as a base, we use crab apples and fresh ginger to create an intriguing gin which is both sweet and smooth – balanced with a subtle gingery zing at the same time. 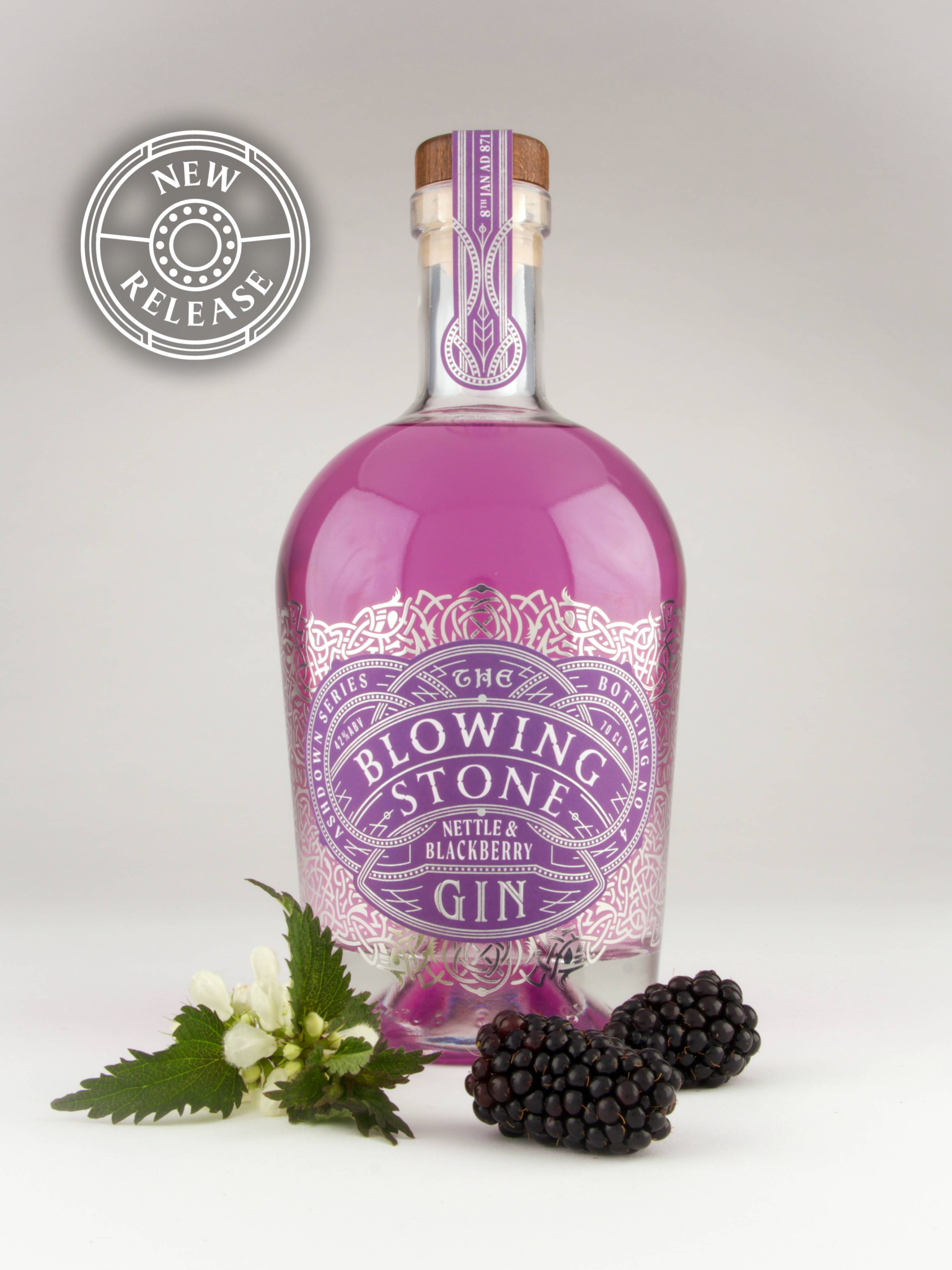 The fourth release in the Ashdown Series is our Nettle and Blackberry Gin. Batch-distilled using our three-part process, we use a blend of beautifully balanced botanicals which could be found locally during the middle ages.

Using our delicious London Dry recipe as a base, our recipe includes tender young nettles, used by Anglo Saxons and Vikings as an ingredient in food dishes as well as in fabric-making. Blackberries or ‘Brymbyl’ in old English were abundant, growing wild, with brambles often used as a form of defence against invaders. 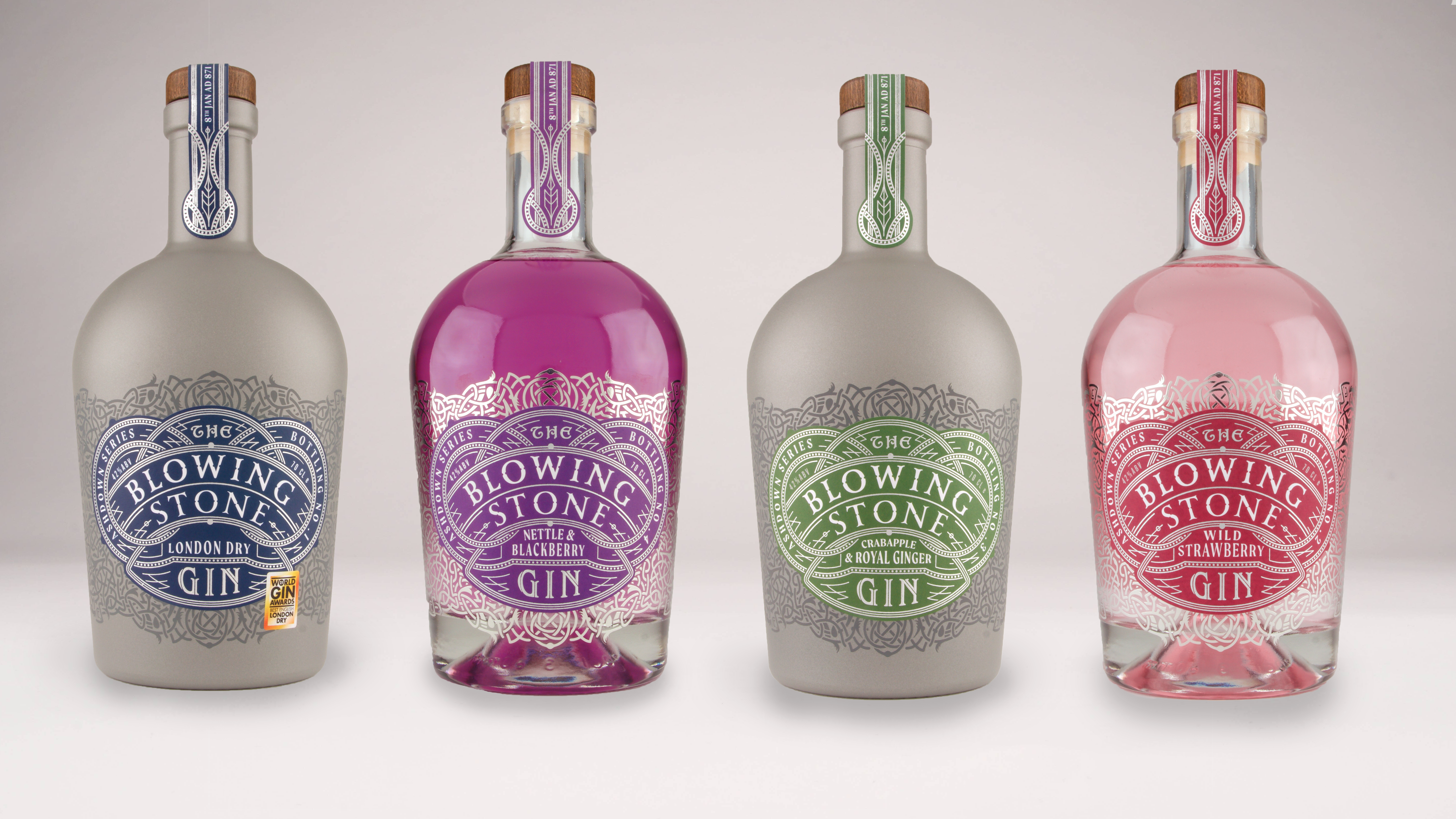 Treat yourself to the full set of Blowing Stone gins!

The Ashdown Series is a tribute to Alfred’s first victory over the Danish Vikings. Batch-distilled using our three-part process, we use a blend of beautifully balanced botanicals which could be found locally during the middle ages.

Treat yourself to a set of Miniature Blowing Stone gins beautifully presented in our new gift box! The Ashdown Series is a tribute to Alfred’s first victory over the Danish Vikings. Batch-distilled using our three-part process, we use a blend of beautifully balanced botanicals which could be found locally during the middle ages.

If you are local to our Distillery in Compton, Berkshire then you may collect your order free of charge any weekday. When purchasing, select the option for collection from distillery which is on the right under “Shipping”. We will then notify you when your order is ready to collect!